If you’re one of the millions glued to BBC1’s Call the Midwife, you may be wondering where this fabulous new series is filmed. The Sunday night favourite may be set in London’s east end during the 50s but it’s actually shot all over the south of England. The building used for Nonnatus House is actually in north London and the cobbled street and alleyway scenes were shot at Chatham historic dockyard in Kent.

“One of the challenges for us was to find our central location of Nonnatus House,” says Executive Producer Pippa Harris. “The real convent where Jennifer was based has now been turned into luxury flats, so that wasn’t an option. Hugh Warren, our producer, discovered a magnificent disused seminary in Mill Hill, which designer Eve Stewart was able to convert not only into the dining room, kitchen and clinical room for the nuns and midwives, but also their bedrooms, as well as the interiors for most of our guest characters’ homes.

“Filming at the docks in Chatham was a great experience. It allowed us to bring a real sense of scale to the production and glimpse what it must have been like to work alongside a busy dock in the 1950s. Watching our midwives cycling through the crowds of extras, with cranes unloading heavy goods, trains trundling past, and the river in the background, was really terrific.”

“I knew that we would have to start with at least the shape of an historic dock and was lucky enough to have seen Chatham Docks before. I just knew it was the right place to go and the people there were amazingly helpful. They moved trains, cranes and original vehicles for us,” says Production Designer Eve Stewart, who was Oscar-nominated for her work on the hit film The King’s Speech.

“Chatham docks was beautiful,” says Miranda Hart, who plays Chummy. “Sometimes I felt like I was in a film cycling along the docks with a hundred extras. It’s filmed on such a lovely scale, they’ve done it beautifully.”

If you’re tuning into tonight’s Midsomer Murders, look out for the amazing Civil War re-enactment scene which was filmed at magnificent stately home Knebworth House in Hertfordshire.

The stunning stately home which has been in the Lytton family since the 15th Century has popped up in previous Midsomer episodes and in this one, The Dark Rider, doubles up as fictional Quitewell Hall.

The production team enlisted the help of historical event organisers The Sealed Knot to make the re-enactment as authentic as possible and they became stars in their own right.

“We have about 200 members of the Sealed Knot as extras.  They are volunteers but came and camped beforehand and threw themselves into it wholeheartedly,” says the drama’s new producer Jo Wright. “We had four cameras filming at Knebworth with cannons and muskets firing. It was very exciting.”

Jo also reveals she plans to develop the partnership of Barnaby, played by Neil Dudgeon and Jones who is played by Jason Hughes. “I really like their relationship, there is definitely a bit of a bromance going on,” she laughs.

“They’re a bit Holmes and Watson, and there is a great chemistry between then, both on and off set.  Neil and Jason are both such great dramatic and comic actors and their timing is exquisite.” 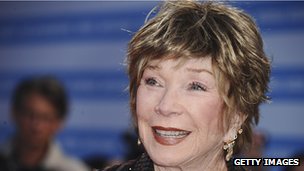 As Downton Abbey prepares to start filming series three in a few weeks, Hollywood star Shirley MacLaine is jetting in to join the cast as Lady Grantham’s mother.

The veteran actress will play feisty Martha Levinson who promises to give Dame Maggie Smith’s character, the Dowager Countess, a run for her money.

Gareth Neame, Managing Director of Carnival Films which makes the series,  said: “My late grandfather directed Shirley MacLaine in Gambit in 1966 so it is a delight for me that she will be joining us on Downton Abbey.  Julian has written another brilliant character in Martha Levinson, who will be a wonderful combatant for Maggie Smith’s Dowager Countess and we are excited at the prospect of Shirley MacLaine playing her.”

To learn more about Downton and where it’s filmed, buy The British Television Location Guide.

Posted in Downton Abbey, The British Television Location Guide | Comments Off on Hollywood royalty signs up for Downton Abbey