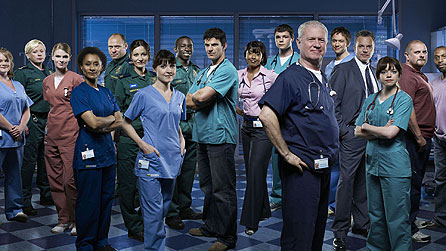 When Casualty returned to our screens after the explosive pre-Christmas episode, fans may have noticed A&E had received a fresh lick of paint.

In fact the whole of Holby General has actually been transformed – literally – as, after 25 years of filming in Bristol, production of the long-running medical drama has shifted to Cardiff.

Now instead of using locations in Bristol City Centre, most episodes will be filmed at the multi-million pound Roath Lock studios which boasts 170,000 sq ft of production space and will also be home to the likes of Doctor Who and Torchwood.

Executive Producer Jonathan Young says the bigger sets the Cardiff base offers means Casualty will now spend fewer days on location. “Which ultimately saves money and means that when you do go on location,” he told the Radio Times. “You can have bigger stunts and spectaculars – something audiences have come to expect from Casualty.”

For more behind the scenes secrets about Casualty and many other top shows, buy The British Television Location Guide.


Posted in Casualty | Comments Off on Casualty filming moves to Cardiff

Devon’s starring role as the filming location for Warhorse

It’s not just the story of War Horse which has captivated movie goers but the breathtaking Dartmoor landscapes which form the backdrop to the blockbuster set in the First World War.

Hollywood director Steven Spielberg admits he fell in love with beautiful Devon as he and the cast and crew enjoyed several weeks there last year filming the story of a farm boy who joins the army to search for his beloved horse, enlisted by the cavalry.

“I have never before, in my long and eclectic career, been gifted with such an abundance of natural beauty as I experienced filming War Horse on Dartmoor,” he told The Independent. “And with two and a half weeks of extensive coverage of landscapes and skies, I hardly scratched the surface of the visual opportunities that were offered to me.”

Spielberg intended to spend just a few days on Dartmoor but decided to increase the shoot after realising its potential and several villages pop up in the film, including Meavy and Widecombe-in-the Moor. Ditsworthy Warren House, an isolated Grade II listed building near Sheepstor, doubled up as the Narracott’s family farmhouse and many scenes were shot in the surrounding area.

You can visit the filming locations used in War Horse and enjoy War Horse walks. Go to the Dartmoor National Park Authority‘s website or www.moorlandguides.co.uk for more information.

For more filming locations in Devon and across the UK, buy The British Television Location Guide.

Posted in The British Television Location Guide, Warhorse | Comments Off on Devon’s starring role as the filming location for Warhorse

The gritty and atmospheric ITV1 detective drama Whitechapel might be set in London’s East End but most of the filming for interior scenes takes place in Crouch End in North London, where a purpose built set housing the sets for Whitechapel police station was constructed inside an old municipal building.

Other location filming for the show – which stars Rupert Penry-Jones, Phil Davis and Steve Pemberton – took place out on the streets of Brick Lane and Whitechapel – including some of the historic old cobbled streets where Jack The Ripper stalked his victims – along with other nearby East End locations.